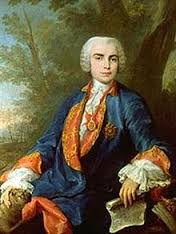 As the most celebrated singer of the 18th century, the life of Farinelli was no joke. Loaded with riches and honors, he was so famous as a performer that his rival, the castrato Gioacchino Conti, is said to have fainted away from sheer despondency on hearing him sing.

Farinelli, along with his other castrati compatriots, were notorious divas; they became just as famous for their temper tantrums and bitchy in-feuding as they were for their glorious voices. Let’s jump in and all learn some more about the fabulous lives of the fabulous singers. And as discussed in last week’s episode, here’s a clip from the Italian movie Farinelli:
We also discuss the castrati‘s fall from grace, and the rise of the “masculine” chested tenor voice, Verdi, and verismo. If you want to learn more about this shift to the tenor voice, please check out the writings of tenor and fancy musicologist John Potter.

Highlights from this episode include Elspeth learning Freddie Mercury’s real name, Kyle confusing Spiderman for the 20th President of the United States, and all of us FINALLY earning our explicit rating.