Welcome to episode 4! In this episode, the first of two, we’ll be discussing the rock stars of the 18th century, THE CASTRATI. Known for their incredible stamina, both on and off the stage (get it?), these powerhouse singers caused audience hysteria wherever they went. 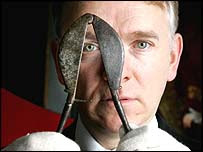 In the 16th century, the church came out with a strict “no women should use her voice in the church ever” policy, and thus the castrati was born.
Join us as we dig deeper into this subject, and explore not only the history of the period, but also the specifics of the procedure itself.
Blame it on the church, boys.
We’ll also discuss Rossini, Casanova, and feral pigs. If you’d like to learn more, we highly recommend the BBC documentary Castrato. You can find the whole thing on youtube, but here’s part 1:
Since the procedure that created castrati was officially banned in Italy in the 19th century, there are no recordings of them singing in their prime. However, you CAN listen to rock star in her own right, Cecilia Bartoli, singing the music of the castrati on her 2009 album Sacrificium. We can’t recommend it enough. Bartoli is the bee’s knees.
Also, here’s a fun drinking game for you: take a drink every time someone says scrotum or testes. We guarantee you will be drunk faster than is safe. Enjoy!
|