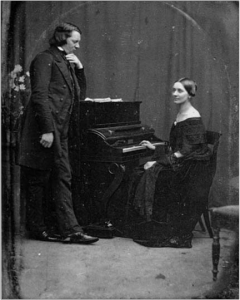 Welcome to episode 8! Today we’ll be talking about those crazy lovebirds, Clara and Robert Schumann. They met while Robert was living and studying with Clara’s father, Friedrich, when Robert was 20 and Clara was…11. But don’t worry, it’s not that kind of story! He didn’t really start falling in love with her until she was 15 and he was 24. It was a different time, folks.

Anyway, the feelings were reciprocated on her end, and they asked her father’s permission to get married, to which Dad said NO WAY. What followed was a lengthy court battled, and the judge ruled in favor of the couple six years later. Needless to say, Clara’s relationship with her Papa never did recover.

But on to the good stuff! They stayed married for the rest of Robert’s life, had beacoup de kids, and lived a pretty happy existence, in spite of Robert’s undiagnosed mental issues (was it schizoprenia? bipolar disorder? no one knows). We do know that Clara was the grounding force in his life, on top of being a badass concert pianist and composer. I mean, her performing career provide the main source of income for their family, and they lived pretty comfortably, which is saying A LOT.

So, all in all, they lived quite happily together…that is, until a wrench was thrown into the works. A wrench named Johannes Brahms. 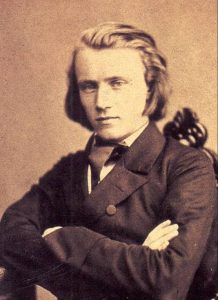 But you’re going to have to wait until next week to find out about that.
|